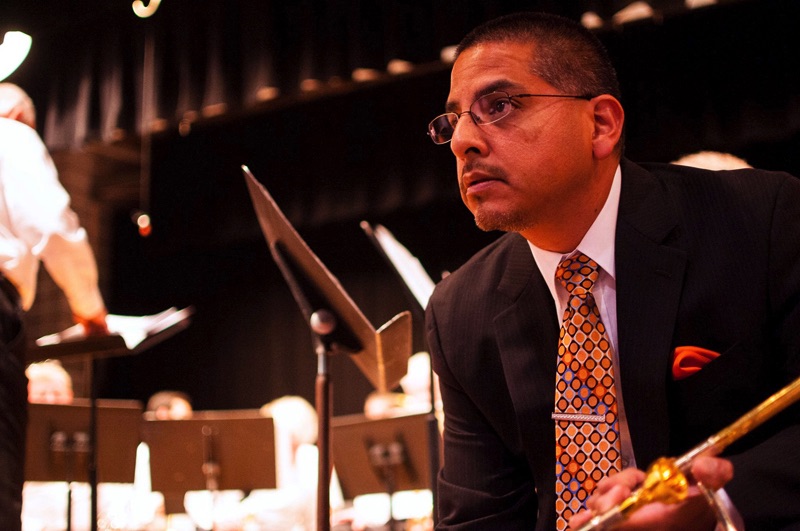 Frank Perez serves as the Director of Bands and Associate Professor of Music at Baker University in Baldwin City, Kansas, where he conducts the Baker Symphonic Winds, Jazz Ensemble, and Pep Band. Additionally, he teaches applied trombone, euphonium and tuba lessons, supervises student teachers, and overseas all aspects of the university band program.Previous positions include director of bands at Graceland University, where he held the prestigious Vredenburg Endowed Chair, graduate teaching assistant at the University of Kansas, and director of bands at Ganesha High School in Pomona, California.He enjoyed eight years of successful high school teaching in Southern California, where his groups earned numerous awards and superior ratings at both district and state festivals.

Dr. Perez is an active as a freelance trombonist, having performed with ensembles such as the La Jolla Symphony, L.A. Guild Opera, Des Moines Big Band, and his trombone quartet, KC Bone Connection. He currently serves as the principal trombonist for the Freestate Brass Band and DeSoto Brass Band. Dr. Perez has recorded with Bones West, The USC Big Band, and for the NAXOS label with the KU Wind Ensemble. He has also appeared as a guest trombone soloist for area high school and community ensembles.

Dr. Perez holds bachelor degrees in trombone performance and music education, and a master of music education degree from the University of Southern California Thornton School of Music. He earned a Doctor of Musical Arts Degree in Wind Band Conducting from the University of Kansas School of Music and has been honored by Phi Kappa Phi and Pi Kappa Lambda honor fraternities, Blue Key National Honor Society, Who's Who Among American Teachers, and most recently by the Phi Beta Mu International School Band Director Fraternity.Dr. Perez serves as the Society for Music Education (SMTE) chair for Kansas and is actively involved with the Baldwin City Lions Club. He is also the President-Elect for the Kansas Bandmasters Association.